An inquiry into the failed prosecution of Vice-Admiral Mark Norman will be held by a special Senate panel.

Members of the Senate’s national defence committee voted last night 7 to 5 in favour of a motion from Conservative Jean-Guy Dagenais to examine the circumstances that led to the military’s second-in-command getting suspended and later charged with breach of trust. 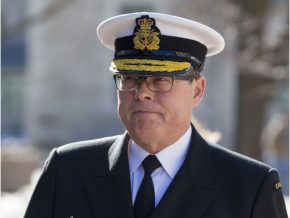 Mark Norman’s two-year ordeal ended earlier this month when the charges were stayed.

Norman had been charged with one count of breach of trust after the RCMP alleged he had promoted a plan by Davie Shipbuilding in Quebec to convert a commercial ship, the Asterix, into a naval refuelling and supply vessel. The federal police force also alleged that Norman tipped off Davie in the fall of 2015 that the Liberal government was considering delaying the project which had been set in motion by the previous Conservative government.

The case against Norman collapsed May 8th because of new evidence. The naval officer, who entered a plea of not guilty, always maintained he had done nothing wrong.