Twenty-four years after the franchise was launched, Toronto Raptors in their first NBA Finals recorded a win!!

Raps led the way for most of the game, and came out ahead 118-109 to take game one of the best of 7 championship. 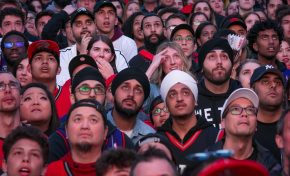 A line-up starting forming outside of Scotiabank Arena to fill Jurassic Park at about 6:30 Thursday morning. The square easily hit it’s capacity of 6000 people soon after the gates opened at 6pm with the overflow extending almost to Rogers Centre.

Then there are all of the other GTA outside viewing areas, sanctioned by Maple Leaf Sports and Entertainment, including Celebration Square in Mississauga (dubbed Jurassic Park West) where some 20,000 people gathered to watch the game.

And ahead of the game, for a global audience, The Tenors did Canada proud with their version of O Canada.