Ukraine’s new president visits Toronto on Tuesday, more than a month before he is scheduled to visit the United States, and Ukraine’s ambassador to Canada says this is by design.

Andriy Shevchenko says this is an indication of just how important President Volodymyr Zelenskiy sees the ties between the two countries that have grown in the last 28 years. 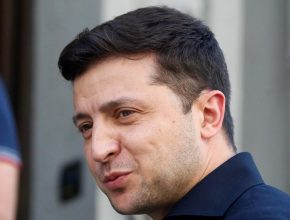 On the sidelines of today’s Ukraine Reform Conference in Toronto, Zelenskiy is scheduled to meet with Prime Minister Justin Trudeau, Canadian Foreign Minister Chrystia Freeland, members of parliament, and business representatives, according to the Ukrainian presidential office.

Zelenskiy and Trudeau will discuss “Ukraine’s reform efforts on its path to Euro-Atlantic integration, the security situation in the region, and how to further deepen Canada-Ukraine commercial relations,” the Canadian prime minister’s office said in a statement.

Zelenskiy has been a TV host and comedian with no previous political experience.

He easily won this spring’s presidential election, unseating Petro Poroshenko, and sparking concern about whether someone who played the Ukrainian president in a fictional TV drama was cut out for the actual job.

Zelenskiy has worked quickly, dissolving his country’s parliament and pushing forward with new elections for that assembly later this month, a timeline that is months ahead of the previous schedule.