IT'S THE END OF THE LINE FOR MAD MAGAZINE

After 67 years on the news stands, it is reported that MAD Magazine will cease publication. 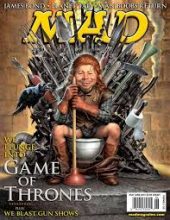 The report comes from a blogger who reportedly discovered the news in a Facebook group after a MAD editor confessed to the magazine’s demise.

As per the report; after the next two issues, MAD will no longer be publishing original material. Instead it’ll publish reprinted material until it’s subscription responsibilities are fulfilled. At that point the magazine will cease publication.