It was 1976 all over again in London as Barbra Streisand and Kris Kristofferson performed a song Sunday night from their 1976 movie A Star Is Born. 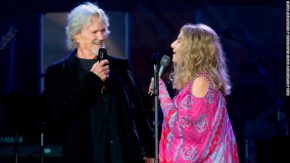 Barbra was headlining British Summer Time in Hyde Park and sang Evergreen from the movie before calling to the stage Kris Kristofferson, introducing him as “one of my favourite leading men.”

She said to Kristofferson, “here’s a song that we sang together in the movie, right?”

The pair then sang Lost Inside of You, with Barbra clearly taking the lead.

Their performance of Shallow electrified the 2019 Academy Awards, and Gaga took home the Oscar for best original song.