The U.S. president is shrugging off sharp criticism for yesterday’s tweets branded as racist, in which he says four outspoken liberal congresswomen of colour should go back to their “broken and crime infested” countries.

Three are U.S. citizens. One is foreign-born.

In a tweet last night, Trump posted that “it’s so sad to see Democrats sticking up for the women.”

While Trump did not name the four women, one of the four he is almost certainly referring to has tweeted in reply. 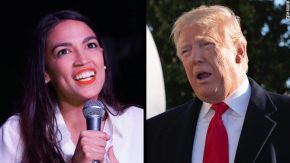 Alexandria Ocasio-Cortez of New York says, “You are angry that people like us are serving in Congress and fighting against your hate-filled agenda.”