“We are helping to do something that so far I’m gratified so far to see and not complacent, which is, we’re driving down the numbers for collisions that involve serious injury and death,” Mayor John Tory explained before Tuesday’s council meeting, “And those numbers are improved this year, and I hope those numbers will continue to improve to our goal of zero.” 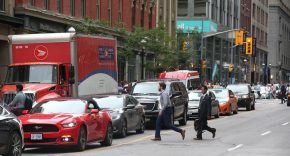 Vision Zero 2.0 will reduce speed limits from 60 km/h to 50 km/h on dozens of arterial roads across Toronto, install more sidewalks and implement more pedestrian head-start signals along with other measures.

There have been 18 pedestrian deaths so far this year, including a woman in her 60s killed near Don Mills and Steeles when she was hit by a garbage truck Tuesday afternoon.

“Between the time we started talking about this and now, a woman died on this stretch of road,” Councillor Shelley Carroll warned her colleagues, “when you hesitate, you lose lives.”

After the first safety plan was approved in July 2016, 45 pedestrians and cyclists were killed in 2017, and last year the number jumped to 47.

The first plan included designated senior safety zones, since pedestrians who are 55 and older are more likely to die of their injuries if hit in a collision.