It was a no show for Toronto’s now infamous ‘Chair girl’ in court on Thursday. 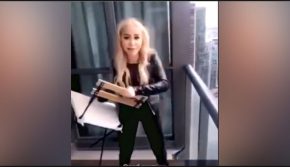 Marcella Zoia had been due to appear at Old City Hall Court  for a judicial pretrial, however, her lawyer appeared on her behalf and explained that Marcella is currently in Miami on a modelling contract, scored due to her notoriety.

The 19-year-old is facing charges of mischief endangering life, mischief involving damage to property and common nuisance for allegedly tossing a chair from an upper-floor balcony toward the busy Gardiner Expressway in February.

Zoia is allowed to travel so she is not breaching any bail conditions and the matter has now been put over until August 29th.