The publisher, author and radical political activist who gave the world the word “Yippie,” has died at the age of 87. 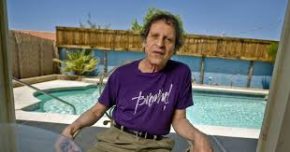 Paul Krassner, was the prankster, who headed the Youth International Party. It became famous for such attention-grabbing stunts as running a pig for U.S. president, throwing dollar bills onto the floor of the New York Stock Exchange and was rumoured to have put LSD in Chicago’s water supply.

Krassner’s daughter confirmed he died yesterday at his home in California. He was an advocate of free-speech, pornography and recreational drug use