It’s a story that’s captured the attention of the nation. 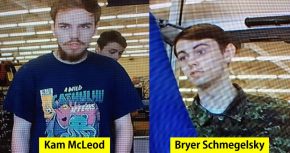 Two teenagers, 19 year old Kam McLeod and 18 year old Bryer Schmegelsky, are still on the loose, wanted in the grisly slaying of a pair of tourists and in the death of another man in northern B.C.

Police say they have reason to believe the two are in Gillam, Manitoba, but OPP in northwestern Ontario have also issued a public safety alert as a Canada wide manhunt continues.

A burned out vehicle, the same one the suspects had been seen travelling in, was found Monday in Gillam.

Alan Schmegelsky is the father of one of the suspects and believes the manhunt will end in tragedy for his son.

“The Mounties are going to shoot first and ask questions later,” Schmegelsky teared up, “basically he’s going to be dead today or tomorrow.”

RCMP say the two should be considered dangerous and not approached. People are asked to call 9-1-1 if the duo is spotted.