PAINTINGS OF WAR VETERANS BY GEORGE W. BUSH TO GO ON DISPLAY AT THE KENNEDY CENTRE

Paintings of US military veterans by former president George W. Bush are to go on display at a Kennedy Center gallery this fall. 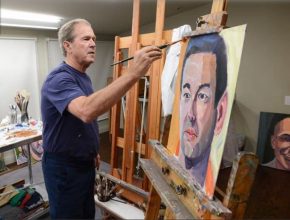 The Washington based cultural centre says it is proud to share these works painted by a living president that honor the men and women who defend the USA.

The paintings have been displayed previously at the George W. Bush Presidential Center in Dallas and featured in a book, “Portraits of Courage: A Commander in Chief’s Tribute to America’s Warriors,” published in 2017.

Speaking at the time, the now 73-year-old Bush said he was inspired by a fellow artist out of Forth Worth to tell the stories everyday Americans, after having previously painted portraits of world leaders.

66 of Bush’s paintings will go on display at the Kennedy Centre from October 7th until November 15th.