MENTAL ILLNESS NOT A FACTOR IN MOST MASS SHOOTINGS: RESEARCH

As is the case every time a mass shooting occurs in the United States, the topic of mental health is brought up. 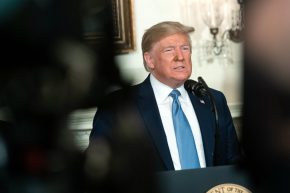 President Donald Trump described the mass shootings in Texas and Ohio as a “crime against all of humanity” during his address to the nation, Aug. 5, 2019, in Washington, DC.(SAUL LOEB/AFP/GETTY IMAGES)

“Mental illness and hatred pulls the trigger, not the gun,” said U.S. President Donald Trump as he addressed his nation on Monday after 2 mass shootings in the U.S. on the weekend, “We must reform our mental health laws to better identify mentally disturbed individuals who may commit acts of violence and make sure those people, not only get treatment, but when necessary, involuntarily confinement.”

But according to research, mental illness is not to blame for most mass shootings.

In fact, most studies of mass shooters have found only a fraction have mental health issues.

Researchers have noted a host of other factors that are stronger predictors of someone becoming a mass shooter: a strong sense of resentment, desire for infamy, copycat study of other shooters, past domestic violence, narcissism and access to firearms.