ONTARIO GOVERNMENT TO PARTICIPATE IN CAMH REVIEW OF PASSES AND PRIVILEGES

The Ontario government says it will be participating in a review of procedures at a Toronto mental health hospital after several patients fled. 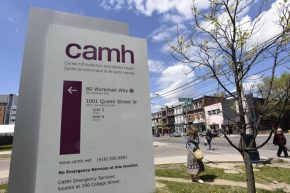 Health Minister Christine Elliott says the province will appoint a government adviser to the panel looking into patient passes and privileges at the Centre for Addiction and Mental Health.

In a statement, Elliott says she will release more information once the government identifies who that person will be.

CAMH announced the external review recently after two escapes by men who had been found not criminally responsible on account of mental illnesses for violent crimes.

A third patient detained at the facility later walked away as well.

The hospital has defended the use of community passes, describing them as an important part of the care a patient receives and that supports rehabilitation and recovery.