The drastic increase in visitor numbers in Europe is now leading to the introduction of restrictions around some of the continents most well known cultural and artistic hotspots. 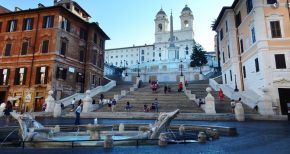 You can now be fined up to 400 euro for sitting, eating or drinking on Rome’s famous Spanish Steps due to an ordinance which took effect in July.

It also applies to other UNESCO-protected places like the Trevi Fountain.

Meanwhile in Paris, the overcrowded Louvre is struggling to cope with the rising tourist tide.

Officials there have had to introduce obligatory advance booking to see Leonardo DaVinci’s Mona Lisa to try and control the numbers.

The museum is the world’s most visited, welcoming a staggering 10 million people last year.