Socializing with friends could protect against dementia.

Researchers from the University of London followed a group of over 10,000 civil servants for a 28-year period to evaluate how social contact affected cognitive decline and dementia.

Over the course of the studied time frame, participants responded to six surveys, which assessed cognitive ability and how frequently they socialized with friends and family.

Frequent social contact throughout late middle age was associated with a decreased risk of dementia and cognitive decline. 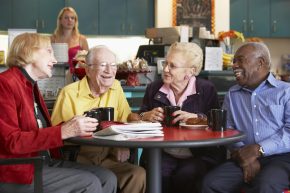 The most obvious benefit was seen in those who socialized more often with friends, but not family, at 60 years of age.

You can read more abou the research in PLOS Medicine.