FORD TORIES TO CHANGE BLUE BIN PROGRAM, WASTE PRODUCERS TO TAKE IT OVER

We’ve been putting recyclables in our blue boxes and bins for 30 years here in Toronto, but the Ford PCs at Queen’s Park are about to make changes to the program after a report finds 30 percent of what’s put into blue bins is sent to landfills. 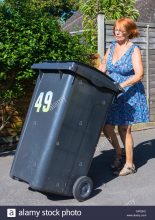 Environment Minister Jeff Yurek says no uniform standards exist for blue bin contents, with over 240 municipalities in Ontario with their own separate lists of accepted recyclable materials, which he says affects cost savings and contamination.

Yurek says going forward, the cost of the program will be transferred over to the businesses and industries creating the waste.

“We are moving towards a model where the producers will now be responsible for the recycling program. They will fund it and manage it,”

Yurek says the goal is to create a new economy of recycled products in Ontario.

Currently, recycling costs are incurred by cities and towns.

Emily Alfred with the Toronto Environmental Alliance says how the province moves forward will monitored closely.

She says her group has been advocating for major changes to the program for some time.