We are expecting to hear more in the coming days from both Premier Doug Ford and Toronto Mayor John Tory on a plan to curb gun violence in this city.

Over the past week, 21 people have been injured by gunfire in this city, adding to a 10-year high for shooting injuries. 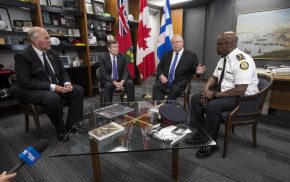 Meantime, Canada’s minister of organized crime reduction says he continues to consider public input on a possible handgun and assault rifle ban. But Bill Blair explains that keeping guns out of the hands of those who would use them illegally, is only part of the solution.

“There are significant things we must do in order to reduce the demand for those guns and change the social circumstances under which that violence takes place. I have been asked to look at the efficacy of a total ban and I believe there are some very effective measures that can be taken,” Blair explained to CP24.

Earlier in the week, public safety minister Ralph Goodale said Canadians can expect to hear more about this issue during the upcoming federal election campaign.