Forensics experts are now trying to determine if the guns two B.C. murder suspects used to kill themselves were the same firearms used in the killings of a University of British Columbia professor, an American tourist and her Australian boyfriend. 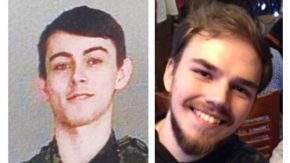 The Mounties revealed Monday that the two bodies found in Northern Manitoba last week were those of 18 year old Bryer Schmegelsky and 19 year old Kam McLeod. Investigators also say the two died of suicide by gunfire.

RCMP investigators say they are compiling a review of the case and will provide the victims families with an update, then release the information publicly.

Schmegelsky and McLeod were the focus of a nationwide manhunt as the duo travelled from northern B.C. to northern Manitoba where their burned out vehicle was discovered.