NOT A SNUB TO EXCLUDE FORD AT TRUDEAU MEETING, SAYS MAYOR TORY

Toronto’s mayor insists that he was not trying to snub Ontario’s premier by not inviting him to his meeting with the prime minister. 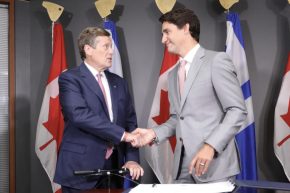 John Tory and Justin Trudeau met Tuesday in Tory’s Toronto City Hall office. It was a meeting Tory says was set up some time ago so he could lobby the prime minister on Toronto’s priorities ahead of the October election.

There were suggestions that Tory should’ve included Doug Ford at the meeting, since the day before, the municipal, provincial and federal governments had jointly announced $4.5 million for Toronto police to fight gun crime.

Ford’s name did come up at the post-meeting news conference though, but not in a good way.

For the second day in a row, Trudeau criticized the Ontario Progressive Conservatives, this time for failing to fund a new community centre for the disenfranchised Lawrence Heights neighbourhood.

Last summer, Toronto city councillors proposed a $50-million plan to combat gun violence that relied solely on funding from other levels of government. But at federal budget time, council heard just $6.8 million would be provided by the federal government for community programs despite a request for more than $30-million for those initiatives.