It was 50-years ago today, the Woodstock Music and Art Fair opened its gates in upstate New York. 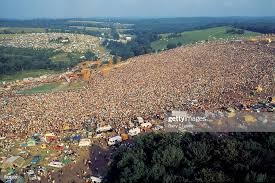 More than half a million people gathered on Max Yasgur’s farm near Bewthel, New York in a celebration of peace, music and love.

Fifty years later, there are anniversary celebrations of Woodstock large and small taking place throughout the U.S. and around the world, along with new films, music, books and socially responsible products.