BOND'S ASTON MARTIN MOST EXPENSIVE CAR IN THE WORLD 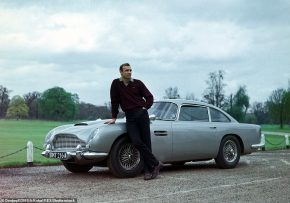 A vintage Aston Martin DB5 equipped with all the James Bond gadgets used in the 1964 classic “Goldfinger” has sold at a Sotheby’s auction for a staggering $6.4 million.

It’s a 1965 model and comes complete with pop-out machines guns, a bullet-proof shield and of course tire shredders.

It’s described as the “the most famous car in the world’ and it’s now the the most expensive DB5 ever sold at auction.