U.S. PUTTING GRAPHIC WARNINGS ON CIGARETTE PACKS, 19 YEARS AFTER CANADA BECAME FIRST NATION TO DO SO

In 2000, Canada became the first country to put graphic warnings on cigarettes. 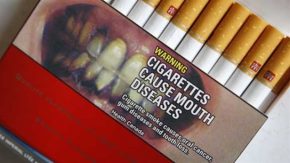 Since then, nearly 120 nations around the globe have mandated the bigger, graphic warnings.

The U.S. is not one of them, but that’s about to change.

Thirteen new warnings are being proposed for cigarette packages by the U.S. Food and Drug Administration, the first change to American cigarette warnings in 35 years.

The FDA proposal would see graphic images added to cigarette packets, taking up half the front label, and include text warnings.

Those images would include cancerous neck tumours, diseased lungs, and feet with amputated toes, while other colour illustrations would warn smokers that cigarettes can cause heart disease, impotence and diabetes.

Previous research has shown graphic images on cigarette packages are twice as effective than text only “smoking-kills” labels.