The opening few guitar riffs in “Layla” by Derek and the Dominoes make up one of the most instantly recognizable hooks in rock and roll history. 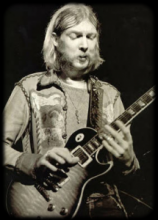 And the guitar that played those memorable notes from that iconic song have fetched more than a million dollars at auction.

The gold-topped guitar belonged to Duane Allman and had been affectionately dubbed “Layla.” It had been on display at the Allman Brothers Band museum at The Big House in Macon.

It was sold in an auction to an anonymous collector. He’s agreed to loan the axe back on certain occasions.

The recording session for Layla was one of the final times Allman ever played that guitar.