A statement from Ralph Goodale says terrorism knows no borders so countries need to work together to keep each other safe. 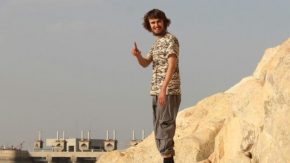 Jack Letts, who’s been dubbed Jihadi Jack by the British media, has been detained for about two years after he traveled to Syria in 2014 to apparently join the Islamic State terror group.

A statement from the U.K.’s Home Office, which is responsible for the country’s immigration and security, says that revoking British citizenships is a way it counters terrorist threats.

The U.K.’s actions may make the alleged ISIS fighter the sole responsibility of the Canadian government.

“Instead of him now being a dual national, where Canada would potentially work with the U.K. about deciding how best to bring him home, where he would be repatriated, if so, who would prosecute, now that rests entirely on Canada’s shoulders,” explained Leah West, of the Norman Paterson School of International Affairs.

Ralph Goodale’s office also said it’s aware of other Canadian citizens in Syria but that consular services cannot be given because of “undue risk in this dangerous part of the world.” The statement added there is “no legal obligation to facilitate their return.”