Ontario municipalities are going to have to foot a bigger share when it comes to funding things like public health and child care expansion. 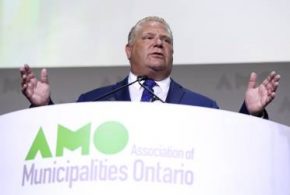 The province is moving ahead with cuts to municipalities effective January 1, 2020. They had previously announced the cuts would be applied retroactively but municipalities spoke out and said their budgets for the year had already been passed.

In many cases, the province used to fully fund public health and 75% in others. The changes to the funding formula will be made incrementally.

“Child care funding (changes) will be phased over a three-year period starting in 2020,” said Steve Clarke, the Minister of Municipal Affairs and Housing on Zoomer Radio’s ‘Fight Back with Libby Znaimer.’ “Our partners have advised us this is going to require more lead time. We’re going to continue to encourage municipalities to partner with us to support children and families.”

The province has previously offered a fund to help municipalities find efficiencies. They say this will help them save some money to help handle their new responsibilities. Premier Doug Ford says most municipalities have taken the province up on that offer.

The Premier’s Office says municipalities will see a funding increase they’re required to make in these areas capped at 10 percent for next year.

“We need everyone to take a deep breath and calm down,” said Toronto city councillor James Pasternak on today’s ‘Fight Back.’ “Make sure there’s constructive engagement, and go through things line by line.”

Many Toronto councillors and public health workers came out strongly when the province initially announced the cuts were retroactive. The province backtracked on that initial plan.