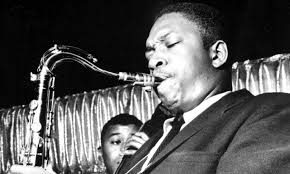 The tracks on the album “Blue World” were recorded by Coltrane’s classic quartet in 1964 for the NFB production “The Cat in the Bag”.

The movie premiered that year at the Montreal International Film Festival. It won the Grand Prize for Canadian cinema, but then gathered dust in the NFB vaults until earlier this century.

Coltrane, an American jazz saxophonist and composer, died in 1967 at the age of 41.