Opposition members of Parliament will try today to get more pre-election traction out of the SNC Lavalin affair at a special Commons committee meeting. 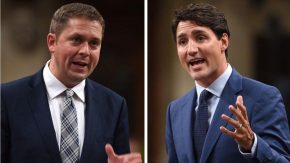 Conservative and NDP MPs want Ethics Commissioner Mario Dion to testify about his findings that Prime Minister Justin Trudeau violated the Conflict of Interest Act by pressuring his ex-attorney general to end criminal proceedings on corruption charges against SNC.

But Liberals hold a majority on the committee and likely don’t want to keep controversy in the headlines before the October election.

Not that the ethics commissioners report seems to be having much effect on voters intentions.

A new Leger online poll finds the Liberals and Conservatives are locked in a dead heat, each with support of 33 percent of voters.

Liberal support was unchanged from last month, while Conservative support was down three points.

The new Leger poll puts support for the other three national parties far behind the Liberals and Conservatives.

The Green Party has 13 percent, the NDP 11 percent and the People’s Party of Canada has 4 percent.