The owner of the controversial billboards featuring Maxime Bernier’s face and a slogan advocating against mass immigration – says the ads are staying up because the content is not in violation of the Canadian code of advertising standards or their own policies. 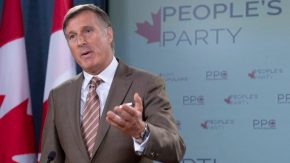 Criticism has been pouring in since the billboards started popping up across the country late last week.

But Pattison Outdoor issued a statement on their social media accounts today saying that if people have an issue with the content, they should contact the advertiser, True North Strong and Free Advertising Corp.

The ads tell people to vote for Bernier’s People’s Party of Canada – though the party says it is not affiliated with the third-party group running them.