A leading illustrator who reached millions of TV Guide readers with his cover portraits of television stars has died at the age of 84. 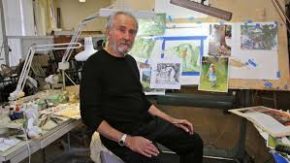 Later in his career, Charles Santore found his artistic chops depicting characters from classic children’s books. But his most recognizable work appeared on about 30 covers of TV Guide, beginning in 1972, some years before the magazine reached its peak weekly circulation of about 20 million.

His first cover rendered Peter Falk holding a cigar as the private detective in “Columbo.” Later covers depicted the stars of “Kojak,” “The Jeffersons” and “60 Minutes.”

His 1976 cover depicting Redd Foxx as the title character in “Sanford and Son” hangs in the Smithsonian National Portrait Gallery in Washington, D.C.