She may no longer we with us, but Carrie Fisher lives on in the newly released trailer for the latest movie in the Star Wars saga. 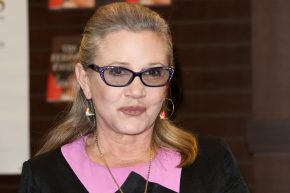 Fisher briefly appears in the newest trailer for “Star Wars: The Rise of Skywalker.” The new movie is scheduled for a December release.

The movie wraps up the third separate trilogy in the saga.

Fisher died in 2016 at 60 years old. She’s included in the trailer and in the upcoming movie thanks to footage from the previous two movies in the trilogy that were unused.

The role of Princess Leia Organa made Fisher a household name when the very first “Star Wars” movie was released back in 1977. She returned to the role in 2015 “The Force Awakens” and “The Last Jedi” in 2017.

Director J.J. Abrams says the Leia character is “the heart of the story.”

Fisher’s principal co-stars from the very first trilogy, Harrison Ford and Mark Hamill had their characters killed off in the latest two “Star Wars” films.

Billy Dee Williams, another holdover from the first trilogy, will reprise his role as Lando Calrissian in the upcoming movie.