The longest serving and oldest member of the U-S Supreme Court was in the Queen City yesterday accepted an honourary degree from the University at Buffalo. 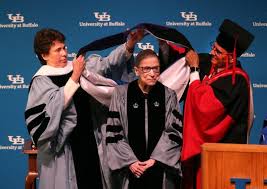 86-year old U-S Supreme Court Justice Ruth Bader Ginsburg was appointed the the highest court in the U.S. by then President Bill Clinton in 1993.

She recently underwent treatment for a cancerous tumour on her pancreas.