Even though the changes to give priority to streetcars along a busy stretch of King Street in Toronto’s entertainment district have been in place for nearly two years, it seems drivers are still struggling with the concept. 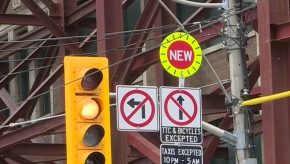 Toronto police say some 16,000 tickets have been issued to drivers since the controversial Pilot Project begin in November of 2017.

The rules state you can only drive on King Street for one block between Bathurst Street and Jarvis Street.

After that, signs indicate that you can only turn right, while advancing down King Street is reserved only for streetcars.

According to police, people from outside of the city are the biggest culprits.