US AND ATLANTIC CANADA BRACE FOR WEATHER

The U-S southeastern coast is watching and waiting for hurricane Dorian, the Atlantic Canada gets set to ride out tropical depression Erin. 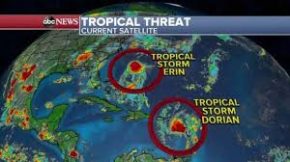 Dorion is crossing open waters now after sparing the island of Puerto Rico the worst overnight.

Atlantic Canada is also battening down the hatches.

Tropical Storm Erin has been downgraded to a tropical depression but its still expected to bring strong winds and heavy rainfall when it arrives in Canada tonight.

It’s expected to track across parts of New Brunswick, Nova Scotia and PEI before taking aim at Newfoundland and Labrador. Environment Canada advises some areas could see more than 100 milimetres of rain.