"COME FROM AWAY" WRITERS TEAM WITH ELLEN FOR THEIR NEXT PROJECT

The Canadian team behind the hit musical “Come From Away” will be working with arguably the current queen of daytime television for their next project. 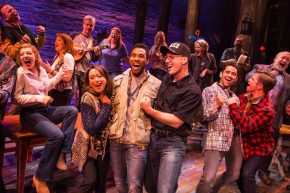 Irene Sankoff and David Hein will team up with Ellen Degeneres for a new television series.

Warner Bros. Television confirmed on Friday that Sankoff and Kein will write and executive produce a one-hour drama entitled “How to Get Run Over by a Truck” that will air on the CW Network.

Degeneres will get an executive producer credit on the show.

“Come From Away” has been receiving worldwide acclaim as it tells the story of the planes that were diverted to Gander, Newfoundland and Labrador on 9/11 when the airspace around the U.S. was closed to all air traffic.

“How to Get Run Over by a Truck” will be based on a memoir of the same name by Katie McKinnon. She was hit by a semi truck while riding a bicycle in New York when she was 24-years-old.