Comedy legend Steve Martin is involved in art auction here in Toronto this fall. A painting by Lawren Harris will be offered by the Heffel Fine Art Auction House, after being consigned by the famous fan.

The 1928 oil-on-board is one of several Harris works collected by Martin, who has helped raise the Canadian painter’s international profile.

The American actor, comedian and musician donated a canvas by Harris to the Museum of Fine Arts in Boston in 2017. 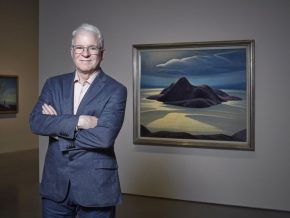 Martin also co-curated a 2015-2016 exhibition of Harris northern landscapes which made stops in Los Angeles, Boston and in Toronto.

Martin says the artist’s work was a hit with U.S. art lovers.