Iraqi officials say at least five more protesters have been shot and killed in anti-government demonstrations that have raged in four neighbourhoods in the capital Baghdad, bringing the day’s death toll to 14. 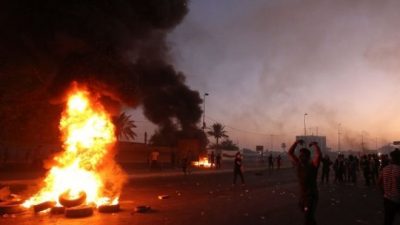 Image courtesy of the BBC

The unrest comes after an around-the-clock curfew in Baghdad was lifted Saturday. But there was no dent in the unrest sparked by calls for more jobs and an end to corruption.

In the southern suburb of Zaafaraniyeh, one more protester died of his wounds, according to a medical official there, bringing the area’s death toll to two.

The violence Saturday comes despite calls for calm from religious and political leaders. One protester was also killed in the southern city of Diwaniyah where protesters were marching toward the local government’s offices.