Former U.S. president Jimmy Carter has a black eye and multiple stitches above his brow after a nasty fall at his Georgia home on Sunday.

But that didn’t stop him from attending an evening concert and ceremony in Nashville to rally volunteers ahead of his 36th home-building project for Habitat for Humanity. 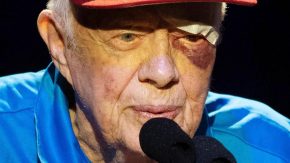 “I fell down and hit my forehead on a sharp edge and had to go to the hospital and they put fourteen stitches in my forehead,” Carter told the gathering.

Carter, who turned 95 last week, was with his wife Rosalynn Carter and said his first priority is to volunteer.

The Carters were introduced by country stars Garth Brooks and Trisha Yearwood, who called the Carters the hardest-working volunteers.