NETFLIX DOES AN END-ABOUT FOR "THE IRISHMAN"

For the first time in its more than 112-year history the 1,000 seat Belasco Theatre on Broadway is being turned into a cinema to screen Martin Scorsese’s crime drama “The Irishman.” 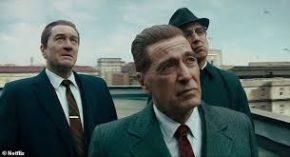 The move came after regular movie houses rejected the Netflix production over its plans to debut the movie on the streaming platform just three weeks after its theatrical debut.

In order to be eligible for the Academy Awards, films have to be screened in theatres.

The Belcasco has staged such productions as “A Raisin in the Sun,” “Hamlet” and “The Rocky Horror picture Show.”

Tickets go on sale next week.