Smiles, hand shakes and fist bumps at the Toronto Symphony Orchestra last night after it received a ten million dollar donation, the largest single donation in the TSO’s history. 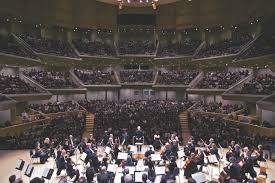 The CEO of the orchestra, Matthew Loden, made the announcement last night in front of a packed Roy Thomson Hall.

The $10 million is from the estate of long-standing supporters and patrons Tom and Mary Beck. It brings the lifetime donation to the TSO from the Beck family to more than $20-million.

In accordance with the wishes of the family, the gift is being directed toward supporting key artistic initiatives, reducing the orchestra’s accumulated deficit and growing the Toronto Symphony Foundation endowment.