A toddler suffered life-threatening injuries in an alleged hit-and-run that also sent two women to hospital in Toronto’s east end on Sunday morning. 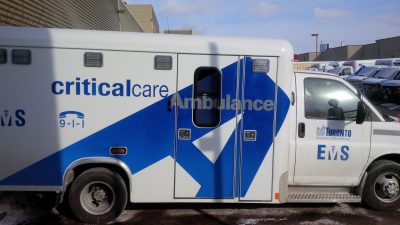 Toronto Police Inspector Mandeep Mann says an SUV struck the women and the toddler at about 11:00 a.m., smashing the 20-month-old boy’s stroller to pieces.

He says the trio was on the sidewalk near Pharmacy Avenue and Ellesmere Road when they were struck, and both women were seriously injured.

Mann says a passenger got out of the SUV to survey the scene before running away.

He alleges the man behind the wheel drove off moments later.

Officers are looking for the driver and any passengers who were in the silver Dodge Journey, which has extensive damage to its front end.