WITH CONSERVATIVES AND LIBERALS TIED FOR FIRST, NEW DEMOCRATS LAY CLAIM TO CPP AND OAS

With the Liberals and Conservatives still in a statistical tie for first place ahead of Monday’s election, a new poll suggests 43 percent of GTA voters are more worried about the prospect of the Conservatives gaining power than four more years of Liberal rule. 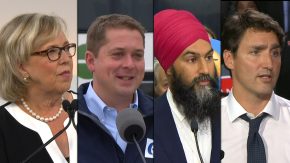 “Our healthcare system was only possible because Tommy Douglas fought for it. When we had changes so that seniors could retire with dignity, pension and CPP and Old Age Security, these were things that were brought in because New Democrats were there. So I’m saying to you, I want to be your prime minister, but whatever Canadians vote for, come the 21st of October, I want Canadians to win,” Singh explained while in late NDP Leader Jack Layton’s riding of Broadview-Danforth.

As a point of clarification, both the CPP and Old Age Security were brought in under Liberal governments; OAS in 1927 under MacKenzie King and the Canada Pension Plan in 1965 under Lester B. Pearson.

Wednesday on the campaign trail, all three main party leaders will spend time in Montreal. Green Party Leader Elizabeth May is in British Columbia, for an announcement in Victoria.