ALL-FEMALE SPACEWALK TO TAKE PLACE FOR THE FIRST TIME FRIDAY

Six months after it was originally scheduled to take place, two female astronauts are ready to make history. 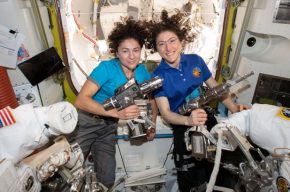 On Friday, a spacewalk will be conducted by an all-woman crew for the first time.

Christina Koch and Jessica Meir will step out of the International Space Station and replace a battery charging unit outside the space station that stopped working last weekend.

This piece of history was supposed to happen six months ago but a lack of appropriately-sized space suits forced NASA to scrub the mission.

Koch has been a resident of the ISS since March and Meir arrived in September.