Some on social media have suggested this, but an Elections Canada spokesperson says “a foreign citizen tweeting, or speaking at an event organized in Canada, does not by itself constitute an instance of undue foreign influence under the Canada Elections Act.” 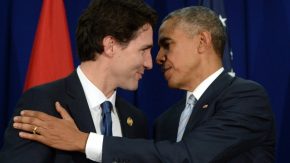 In a tweet on Wednesday, Barack Obama calls “Trudeau a hard working, effective leader who’s been taking on major issues like climate change.” Obama also says “the world needs progressive leadership and he hopes Canadians support Trudeau for another term.”

Trudeau was asked by reporters if he or his team requested the endorsement from Obama.

“I appreciate the kind words and I’m working hard to keep our progress going,” Trudeau responded.

“I’ve got millions of Canadians like the ones here tonight behind me. I’m not very interested in what former foreign leaders are saying. I’m just focused on finishing this election strong and putting forward my plan to get Canadians ahead,” Scheer answered.

As for the NDP leader’s reaction to the high profile endorsement, Jagmeet Singh said, he has a lot of respect for Mr. Obama but “in this regard he is wrong.”