A tornado spawned by Tropical Storm Nestor damaged homes and a school in central Florida but the storm spared an area of the Florida Panhandle devastated one year ago by Hurricane Michael. 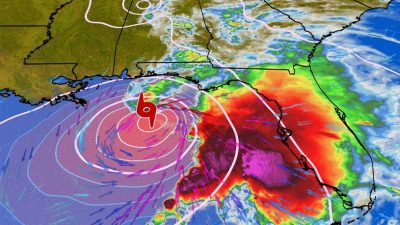 image courtesy of The Weather Channel

The Polk County Sheriff’s Office said Saturday several homes and a school were damaged when the tornado hit late Friday near Lakeland, about an hour’s drive southwest of Orlando. Sheriff Grady Judd said no one was injured.

Meanwhile, Mexico Beach Mayor Al Cathey said his Panhandle town got some much needed rain but no damage from the storm. Hurricane Michael nearly destroyed the town one year ago. He said the town was “fortunate.”

The National Hurricane Center in Miami said late Saturday morning that Nestor was no longer a tropical storm, but still had strong wind gusts and was creating storm surge on some beaches. Its top sustained winds of 50 mph (80 kph) and was moving northeast at 9 mph (14kph) as it neared the Florida Panhandle coast near Mexico Beach.