She is only 19 and is now the the highest-ranked Canadian tennis player in WTA Tour history. 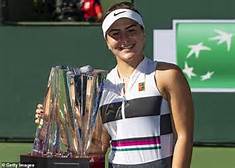 The Mississauga native jumped one spot to No. 4 in the rankings after three tournament victories and a 17-match unbeaten streak this season.

Entering the season Andreeescu was ranked outside the top 150 but charged up the rankings after wins at Indian Wells, The Rogers Cup and the U.S Open.

She had he 17-match win streak snapped when she lost a quarter-final match at the China Open earlier this month.