Despite all the times Justin Trudeau invoked his name during the federal election campaign, Doug Ford congratulated the Liberal leader on his re-election and the other leaders on ”a hard fought campaign.” 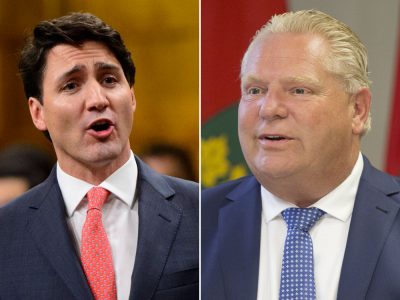 ”Our government looks forward to working with the Prime Minister, and with all federal parties, to build better public services and make life more affordable and prosperous for Ontarians and all Canadians,” Ford said in a statement.

”We stand ready to work with the federal government on important shared priorities, including building critical infrastructure for the future, breaking down barriers to trade, ensuring better access to mental health services, and investing in health care, education and other vital public services.

Our government is further encouraged by the Prime Minister’s commitment on the campaign trail to fund the federal government’s share of the all-new Ontario Line subway project.

Ontarians need and expect our governments to work with our municipal partners to build new and needed hospital infrastructure, create long-term care beds for  our aging population, address gridlock and congestion on our roads and to build affordable housing for young people and families.

I look forward to working with Prime Minister Trudeau and to continuing to work with the federal government to deliver on the priorities that matter most to the people of Ontario.”

Ford did not mention his government’s ongoing challenge of the federal carbon tax that’s making its way through the courts.
In June the Ontario Court of appeal ruled the tax is constitutional and the province signalled its intention to appeal to the Supreme Court.

Ford said in August he’d speak with his cabinet after the federal election.