Did you grow up going to the Ontario Place Cinesphere to watch movies?

You can now re-live that experience and see movies from the same era. 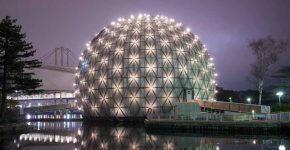 Nostalgic fan favourites are being shown at the Cinesphere as part of a special series.

A release from Ontario Place reads:

The films have been thoughtfully curated including a few specially themed for Halloween and over the holidays. What better way to get into the Halloween spirt and get some costume inspiration then to watch classics like The Thing (1982) and a special screening of Halloween: The IMAX Experience (2018) on Oct 31. We invite visitors to kick off their holiday count down by taking in beloved seasonal classics such as Gremlins (1984), Scrooged (1988), Love Actually (2003), and ET (1982) on the big screen. And, for those that appreciate cult classics, we are excited to feature an array of films including Back to the Future (1985), Back to the Future Part 2 (1989), Blade Runner The Final Cut: The IMAX Experience (1982), Blade Runner 2049: The IMAX Experience (2017), Apocalypse Now -The Final Cut: The IMAX Experience (1979) and Labyrinth (1986).

In addition to the Zoomer faves, newer titles that have never screened in the theatres are also being shown at the Cinesphere.