Toronto’s Mayor says considerations around an aging society are part of every decision made by city councillors. 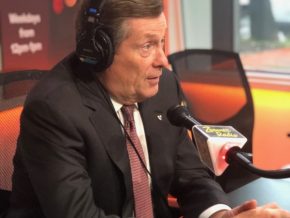 “We are working to make sure transit is more accessible, that pedestrian safety is attended to more, because the majority of people being injured in cars are seniors,” John Tory told Zoomer Radio’s Fight Back with Libby Znaimer.

Mayor Tory explained that even though older Canadians may have felt national issues around aging and healthcare were not addressed in the federal election campaign, advocacy for seniors needs to continue.

“It is a growing group inside the City of Toronto, it’s a group that has well known and well understood needs, and the challenge for us is to keep listening, but also to implement the things that address those needs, Tory said. Listen to Mayor Tory’s entire conversation with Libby Znaimer by clicking here.

Tory says efforts around Vision Zero for instance are particularly important since people 55 and over represent the bulk of the pedestrians losing their lives in completely preventable collisions.

He points out that speed limits have been lowered in hundreds of places around the city,  alterations to crosswalks have been made in dozens of intersections  and the addition of red light cameras has been made to catch speeders. The mayor also promises photo radar is coming in December.