The tentative transit deal, which allows Toronto to maintain control of the TTC in exchange for the city’s support for Doug Ford’s Ontario Subway Line, goes to full council for debate starting today. 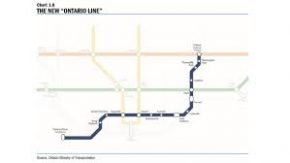 Toronto Mayor John Tory says, despite the nay-Sayers, he thinks he’s worked out a pretty good deal that allows the city to maintain control of the transit system in exchange for the province footing the Ontario Line bill.

However, residents in the Leslieville area of the city are objecting to plans to build that part of the line above ground along the existing rail corridor that runs through their neighbourhood.

Transit expert Steve Munro, who frequently appears on Fightback with Libby Znaimer on  Zoomer Radio, says since the line is still in the early planning stages, there are simply too many unknowns.

The proposed Ontario Line would run south from the Science Centre, then west through downtown and continuing to Ontario Place.