TWO SCREEN LEGENDS ACT TOGETHER FOR THE FIRST TIME

Two legends of the silver screen are united for the first time in the movie “The Good Liar.”

74-year old Dame Helen, who is on the cover of the latest edition of Zoomer Magazine, says it’s a good movie about bad people. 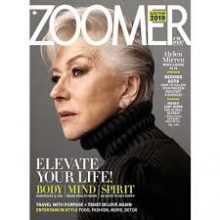 She plays opposite 80-year old Ian McKellen, who likens the film to solving a cross word puzzle.

The stars appeared at the movie’s premier at the British Film Institute in London.